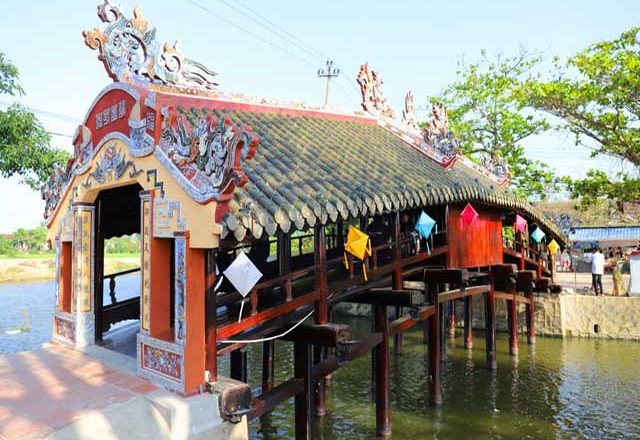 Thanh Toan Bridge is one of the most special bridges in Vietnam. Customers travelling to Hue City, beside royal tobms, Hue Imperial City and pagodas, they aslo have a chance to visit this bridge with stunning view of Vietnam Courntryside. Let Vietnam shore Excursions show you Thanh toan Bridge.

According to some historical documents, in the 16th century, many people from Thanh Hoa Province followed Nguyen Hoang Lord to immigrate to Thuan Hoa (the former name of Hue). Among these immigrants, there were 12 patriarchs set foot on this area and founded Thanh Toan Village.

It was not until the 18th century that Thanh Toan Bridge started its construction. Mrs. Tran Thi Dao, one of the descendants of the sixth generation of Tran family in Thanh Toan Village, donated a large sum to build the bridge. The bridge was built in 1776 and completed in the same year. Besides the bridge construction, Tran Thi Thao also used her money to do many charity works, so she was adored by the villagers.

Being told in the story of the locals in Thanh Toan Village, the canal dividing the village made it difficult for the villagers to do farming activities. Realizing the situation, Mrs. Dao decided to build Thanh Toan Bridge so that the villagers could easily cross the canal. Nowadays, Thanh Dao Villages is a stopover not only for the villagers but also visitors from many other regions.

In 1776, to praise the merit of Mrs. Tran Thi Dao, King Le Hien Tong reduced many kinds of taxes and fees for people in Thanh Toan Village in order that they could practise charity like what Mrs. Dao had done. In 1925, Mrs. Tran Thi Dao was honoured by King Khai Dinh; Thanh Toan Bridge became a place of worshipping her.

The Central of Vietnam owns plenty of huge and magnificent bridges, but Thanh Toan Bridge is completely different from modern bridges thanks to its exclusive architecture. The architecture style “house above bridge” is preserved in only a few constructions in Vietnam. In the Central, there are two remaining bridges in that style, including Cau Pagoda (Japanese Covered Bridge) in Hoi An and Thanh Toan Bridge in Hue.

Many visitors at first may mistake Thanh Toan Bridge for the second version of Cau Pagoda, but the two constructions are quite different in many traits, except for the architecture style. Not located in a crowded town with many tourism and business activities, Thanh Toan Bridge nestles in a small corner of a tranquil village in the suburb of Hue City. Thanh Toan Bridge is made of bricks, wood and ceramic, the popular materials in many historical constructions of Vietnam.

Most of the parts of Thanh Toan Bridge, including the pillars, floor and banisters are made of wood. Unlike the pillars of other architecture decorated in styled patterns, the pillars of this bridge are plain round wood. Thanh Toan Bridge was roofed glazed tiles, a kind of tile that can be easily found in ancient architecture of Vietnam during Nguyen Dynasty. On the mossy roof in dark brown, the image of two dragons flanking the sun is the symbol of spiritual power.

There are 7 small compartments in Thanh Toan Bridge, which is like 7 rooms of a house. The central compartment is locked, which is the place of an altar worshipping Mrs. Tran Thi Dao – the women built the bridge. The other 6 compartments offer wooden stages where visitors sit down and enjoy the surrounding views. In the two bridgeheads are two couplets written in Chinese-transcribed Vietnamese characters.

The large ground at the two bridgeheads is the place for community activities of Thanh Toan Village. The village festivals, business activities and other community events occur near the bridge and also the temple nearby.

On the third day of the first month of lunar new year, the Bai Choi Festival is held in the tile-roofed bridge. Annually, on the Mid-Autumn Festival, another large festival takes place in Thanh Toan Bridge. According to the locals, that day is the anniversary of Mrs. Tran Thi Dao’s death, and the festival is held to commemorate her contribution to Thanh Toan Village. The festival not only attracts the local residents but also the villagers from other regions.

In Hue Festival which is held every two years, Thanh Toan Village is in charge of the procession of Mrs. Tran Thi Dao’s memorable tablet. It is the opening ceremony of “The festive day on the countryside market”. Hue Festival is a good chance to introduce the cultural and artistic values of Thanh Toan Bridge to both domestic and foreign visitors.

What to See and Do near Thanh Toan Bridge?

Nobody can deny the fact that Thanh Toan Bridge is an ideal place for taking a look at the beauty of the surrounding village. Sitting on the wooden platform of the bridge and taking the view of Thanh Toan Village, you can see a peaceful countryside where almost traditional values are reserved. On one side of the bridge, there is a vast green paddy field that has raised many generations of the village. On the other side, water lily flowers blossom out on the water surface, creating an appealing scene every autumn and winter.

Next to Thanh Toan Bridge is a giant banyan tree that has existed for more than a hundred year. The tree as well as the nearby temple adorns the peaceful atmosphere of a village on the side of Hue Citadel. Tourists coming to Thanh Toan Bridge will immediately feel the familiarity of banyan tree, river wharf and temple, which are things attaching to the childhood of those growing up in the countryside.

The market of Thanh Toan Village used to be smaller than it is now. That is the place where villagers purchase their agriculture products, including meat, vegetables, fish, crabs, rice and many other types of food and foodstuff. Besides, goods and farming tools from other villages are also sold at Thanh Toan traditional market.

The flow of life and time has brought a new breath to Thanh Toan market. The market is gradually expanded; products are becoming more diverse. In addition to traditional products, souvenirs for tourists can be found there. And if you feel hungry after taking a tour around Thanh Toan Village, don’t hesitate to stop at a food stall inside Thanh Toan Market and grab a bite. Though the foods are not some kinds of specialties, these are all the familiar dishes of the locals that will leave a long-lasting impression at the very first try.

The canal that Thanh Toan Bridge crosses over is the place of traditional games, including sailboat racing, water-puppet dancing, fish-catching and many other joyful activities. In the temple yard nearby, some folk games of Vietnam are performed, which are tug-of-war, human chess and blind man’s buff. Specifically, after Tet holiday, tourists can have a chance to join in the Bai Choi Festival, which is a kind of performing art with the combination of songs, plays and traditional games. Bai Choi is an exclusive heritage site in Central Vietnam that was recognized by UNESCO.

Except for seeing the most ancient bridge in Vietnam, other activities include rowing boat along canals or riding bicycle on green village road for visiting temples, family worship houses. joining to be a farmer and experiencing farming life, especially learning how to wrap a Tet sticky rice cakes (Banh Chung & Banh Tet) or make a conical hat, etc… Visitors also can go to market, play hut gambling and pounding rice singing (on festivals) as well as enjoy special cuisines.

How to Get to Thanh Toan Bridge?

Thanh Toan Bridge is about 8 kilometers to the southeast of Hue City. The distance is not very long, just around 15 minutes on motorbike and 30 minutes on cyclo or bicycle to reach the bridge.

Please view the details of this tour: Hue Cycling Tour

From the center of Hue City, you follow To Huu Street, then turn right to Vo Nguyen Giap Street. To the intersection of Vo Nguyen Giap and Hoang Quoc Viet streets, you turn left and follow the road to Thuy Thanh Commune.