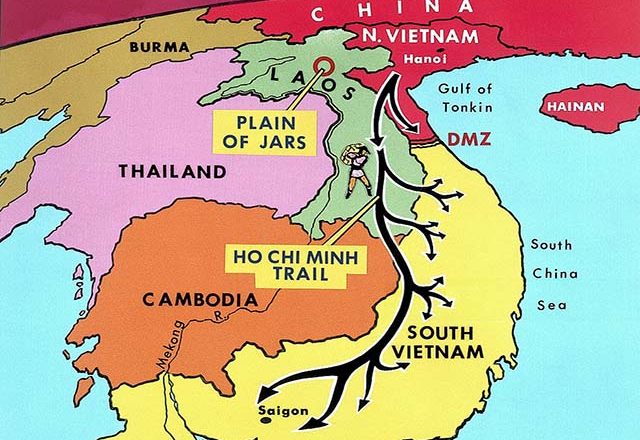 The Ho Chi Minh Trail was a network of roads built from North Vietnam to South Vietnam through the neighboring countries of Laos and Cambodia, to provide logistical support to the Vietcong and the North Vietnamese Army during the Vietnam War. It was a combination of truck routes and paths for foot and bicycle traffic. The trail was actually a 16,000-kilometer (9,940-mile) web of tracks, roads and waterways. The Vietnam People’s Army had decided to build a secret road system to carry war supplies to the south.

The network, initially coded 559, eventually became known as the Ho Chi Minh Trail. It was on one of Ho’s birthdays, May 9, 1959, that the trail’s construction began with the establishment of Military Transport Division 559, comprising 440 young men and women. Over the next 16 years the trail carried more than one million North Vietnamese soldiers and vast quantities of supplies to battlefields in South Vietnam — despite ferocious American air strikes.

The name, taken from North Vietnamese leader Ho Chi Minh, is of American origin. Within Vietnam, it is called the Ðuong Truong Son, or Truong Son Road, after the mountain range in Central Vietnam. Another name given the trail is “The Blood Road.” If relentless American bombing didn’t get him, it would take a North Vietnamese soldier as many as six months to make the grueling trek through jungle down the Ho Chi Minh Trail.

At least 10 percent of the casualties along the trail were from such illnesses as malaria. At regular intervals along the route, the National Liberation Front (NLF) built base camps. As well as providing a place for them to rest, the base camps provided medical treatment for those who had been injured or had fallen ill on the journey. Most of the base camps were underground.

Excavated by hand, intricate interconnecting tunnels with concealed entrances hid trail trekkers, often directly under the feet of American troops searching for them. Radio and telecommunications facilities, food and weapons caches, medical aid stations and barracks, all underground, hid thousands of the North Vietnamese at any given time during the war. The trail system was vastly improved. Even as more people used the trail, the trek was reduced to six weeks for a fit soldier.

The North Vietnamese also used the Ho Chi Minh Trail to send soldiers to the south. At times, as many as 20,000 soldiers a month came from Hanoi by this way. In an attempt to stop this traffic, it was suggested that a barrier of barbed wire and minefields, called the McNamara Line, should be built. The plan was abandoned in 1967 after repeated attacks by the NLF on those involved in constructing the barrier.

On November 11, 1968, Operation Commando Hunt was initiated by the U.S. and its allies. The goal of the operation was to interdict men and supplies on the Ho Chi Minh trail, through Laos into South Vietnam. By the end of the operation, three million tons of bombs were dropped on Laos, which slowed but did not consistently disrupt trail operations.

How to get Ho Chi Minh Trail?

You can get Ho Chi Minh Trail via a taxi from Quang Tri Center. But If you stay at Hue, you should book the DMZ Tour Hue from Vietnam Shore Excursions. This is the best way to see two places and hear the deep history of Vietnam War.